Another layer added to the offerings at Dover Hall!

Check this out, just one more thing going on at Dover Hall this summer – A sprawling estate in Goochland County has added a bed-and-breakfast concept to its offerings as it continues to evolve from a private residence to an events venue.

The new venture was created by Jeff Ottaviano and Chad Hornik, who run Dover Hall Experiences, the group that owns and manages the 55-acre estate. They’ve been coming up with ways to draw visitors to the property since taking over management in 2017. Those ideas have included murder mystery dinners, wine dinners, weddings and other events.

“Jeff and Chad had this [B&B] concept outlined when they took over management of the property,” said Jamie Ashenburg, vice president of operations of DHE. “I think their intention from day one was to open up as a bed and breakfast, open up a restaurant, and use some outdoor pavilion-type space.”

Dover Hall was built at 1500 Manakin Road in the late 1990s as the residence of Dennis and Cindy Pryor. They sold it in 2013 for $5 million to Kevin Brandt, an executive with local finance firm James River Capital, who purchased it through Dover Hall Enterprises LLC, county records show. 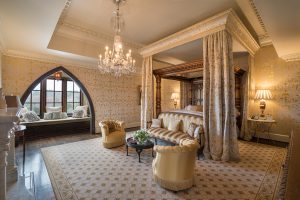 The Queen Elizabeth room is the property’s master suite.

The mansion’s living quarters consist of 10 bedrooms, with four on the third floor and six on the second. Each room is named after a European monarch and has a unique theme.

The child’s suite, for example, originally was the childhood room of the Pryors’ son when the family lived there. It has items that many may recall from their own childhood, such as large wooden toy soldiers marching into combat.

Down the hall is the master suite, also known as the Queen Elizabeth room. For $695 per night, guests can stay in this bedroom and enjoy a sunken bathroom.

Dover Hall has had about 20 guests since opening. They get access to almost all of the property and have the opportunity to partake in any of the events onsite. For example, Dover Hall Experiences contracts with local theater companies to bring original murder mystery dinners, complete with actors. There also are areas that are exclusive to the guests, such as several outdoor patios overlooking the grounds. 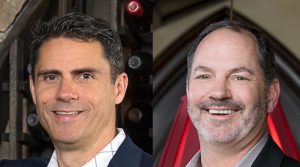 DHE plans to follow through on other ideas for the property as well.

An outdoor pavilion area is planned for 2019, giving the estate an entertainment venue with a seating capacity of 300 people. On the patio below, a restaurant will be built.

That would expand upon the venue’s culinary work, which already is done in an onsite kitchen run by executive chef Lee Hendrickson. He cooperates with Hornik, who is also a sommelier, to create wine dinners.

They had famed winemakers Michael David (of Michael-David Winery in California) and Sebastián Zuccardi from Argentina stay at the estate when they held themed wine dinners.

Ashenburg also said the company is talking with regional wineries about opening a tasting room on the property.