The new owners of an “M”-branded mansion in western Henrico County won’t need to change the letter that personalizes the driveway. After all, it was the family initial that helped seal the deal.

The 2-acre property at the end of a cul-de-sac in the Hunton Estates neighborhood went under contract in late October, six months after it was listed in April. Dara Friedlander with Re/Max Today had the listing and represented the sellers, Miguel and Laura Moreira of Henrico-based Spanish Quality Concrete.

County property records list the buyers as Nirav and Jainy Mehta. They were represented by Hemant Naphade with Choice 1 Real Estate.

Naphade said the Mehtas own hotels and motels primarily in Fredericksburg, where they are relocating from, and other markets across the country. They will be joined in the home by Nirav’s father, who Naphade said is also in hospitality, along with other members of what he described as a large family.

“They chose Richmond because their temple is in Richmond,” Naphade said. “They wanted to settle down in Richmond, and both dad and son wanted a bigger house.”

Having previously represented one of the Mehtas’ siblings in another transaction, Naphade said the family was drawn to the property for its amenities that include tennis and basketball courts, a heated swimming pool, a disco/dance hall, a 12-seat theater and an elevator. He said its two master bedrooms on different floors also appealed to the father and son. 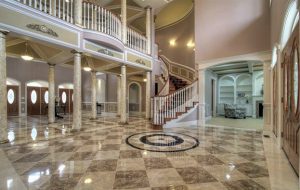 Friedlander, who said she received considerable interest in the listing, said another feature on the property also appealed to the buyers: the personalized initial that the Moreiras had put in the driveway.

“One of (Nirav Mehta’s) favorite things was there’s an ‘M’ that’s embedded into the driveway,” Friedlander said. “It was a custom-built driveway, $100,000. ‘M’ is their last name also, so he said when he drove up to the house and saw that, he took it as a good sign.”

Friedlander said interest in the house came from both out-of-town and local prospective buyers, including an area physician and two entrepreneurs.

“It was a lot of house for some people, but we found the right buyer,” she said.

The Moreiras, who Friedlander said have downsized to another home in the Richmond area, built the house after purchasing the lot in 2008 for $125,000 from Parker & Orleans Homebuilders, based out of Cary, North Carolina. The county’s latest assessment valued the property at $1.27 million.

Totaling five bedrooms and six bathrooms, the three-level house is significantly larger than the smaller-sized homes that also line the cul-de-sac. The lot is located alongside Interstate 295 across from RF&P Park.

The sale is the latest in Henrico to reach the $1.8 million mark. Last November, a 6,500-square-foot house near the University of Richmond topped that month’s area sales at $1.85 million.