Love Church Hill? If you’re thinking of making a move there, act NOW before prices soar!! A cluster of new townhomes planned in North Church Hill is slated to continue to push up the price point for homeownership in the neighborhood.

Bill Pangburn of Richmond-based Savoy Properties is working with local developer Walid Daniel on two pairs of attached single-family houses that they plan to price in the $500,000s.

With each totaling upwards of 3,100 square feet, the three-story homes with four bedrooms and 3½ bathrooms would mark a new price point for new-home construction in North Church Hill, an area generally defined as north of M Street and east of 25th Street between Union Hill and Oakwood Cemetery.

Pangburn is building the homes on three parcels on the northwest corner of North 32nd and M streets. Daniel purchased the parcels in April 2017 for $80,000, according to city property records.

The site at the corner of 32nd and N streets. (Jonathan Spiers)

Two houses on the parcels since have been razed. Where those previously faced 32nd Street, Pangburn is building the new homes to face N Street in an effort to maximize the space available, he said.

The homes are a different type of project for Pangburn, who has picked up multiple Golden Hammer awards from Historic Richmond for his restoration work. He said he has done about a dozen historic restorations in Church Hill in the past 15 years, and he’s currently restoring five properties on Hull Street in Manchester for wife-and-husband team Laura Dyer Hild and Michael Hild.

“My specialty is historic restorations. I couldn’t bring this one back,” Pangburn said of the 32nd Street homes. “Structurally it was a mess and it was unsafe.”

Daniel, who has been active primarily in the Fan, said Pangburn alerted him to the property in what he describes as his first exploration into the Church Hill area.

“Bill talked me into it and the area’s on the uprise. I figure the Fan area is almost saturated,” Daniel said. “The Church Hill area is on the upswing, and it’s very historical like the Fan. I like historical areas.”

The project has received a required conditional-use permit from the city, and Pangburn has broken ground and plans to deliver the homes by late spring. 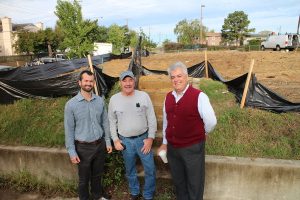 He and Daniel are working with Matt Jarreau of Hometown Realty to list and market the homes. With prices starting above $500,000, Jarreau said the homes will exceed North Church Hill’s existing price point.

While the price tag is higher than typical new construction in the area, there are exceptions. One example is the modern-design home that developer Zach Kennedy built along an alley off M Street. That 2,000-square-foot house, which initially sold in late 2016 for $390,000, sold to new buyers in August for $575,000.

Bryan Traylor, a local builder who has collaborated with Jarreau on other homes in North Church Hill, concurred that those prices would exceed the established price point in the neighborhood.

“It is new territory, and the new territory that we’re talking about, a lot of people don’t really know about it,” Traylor said. “There are really nice pockets of streets, like on the 3200 block of P Street. That road widens to where it’s more like an avenue.”

Traylor recently finished two new homes in that block that, at 2,200 square feet, are each listed at just under $405,000. Those homes add to others Traylor’s Unlimited Renovations has built throughout the neighborhood, including several in the 500 and 600 blocks of North 30th and 31st streets that pushed the area’s price point to $400,000 three years ago.

Traylor emphasized a range of price points is needed, though, to maintain a diverse housing stock and keep residents from being priced out of the neighborhood. He’s among several builders who have turned their focus toward the nearby Carrington Street corridor, where local nonprofit Better Housing Coalition is wrapping up work on The Goodwyn at Union Hill, a development adding 52 income-restricted apartments.

While he’s happy to see the area’s price range widening, Traylor said maintaining the lower end of that range is important.

“I’m hopeful that prices keep rising,” he said. “However, we’ve got the affordable-housing component up there, and we have some middle- to higher-range homes up there. I think it’s a good combination of affordable things, and affordability is all relative.” Above is our current 2 listings. Both brand new construction & priced well below the figures stated above! We’ve also got several more properties coming in this particular area in the next couple months as well. As always….Search all RVA homes here: https://www.thervagroup.com/results-map/